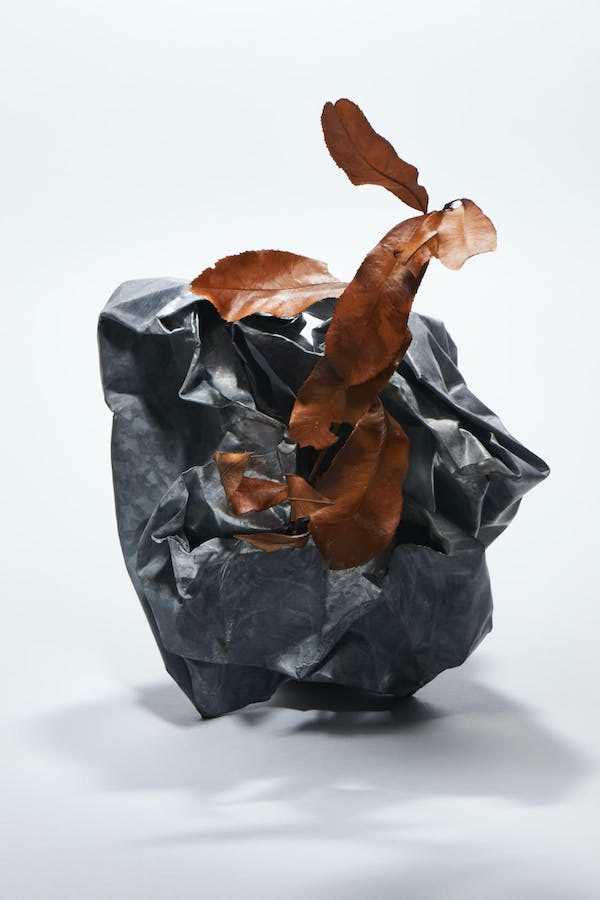 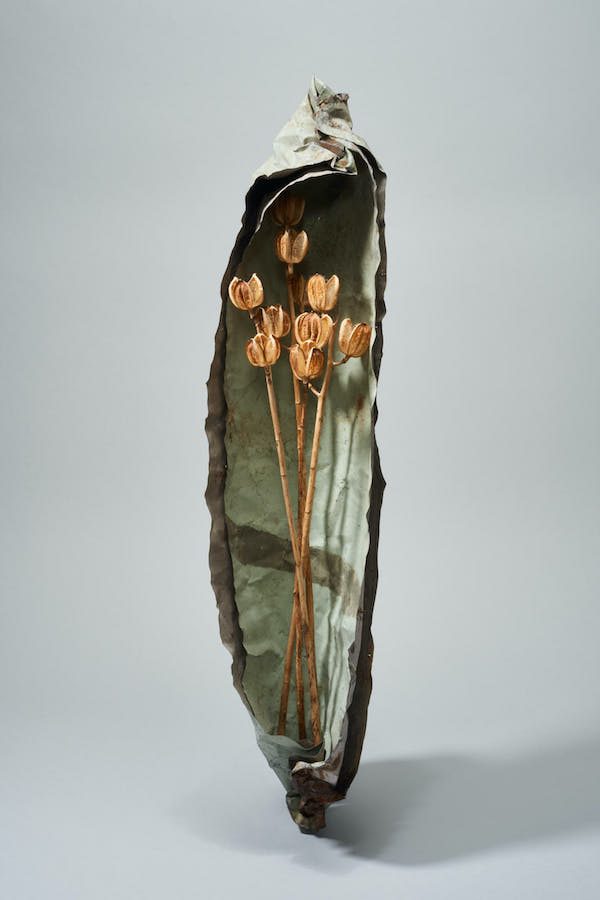 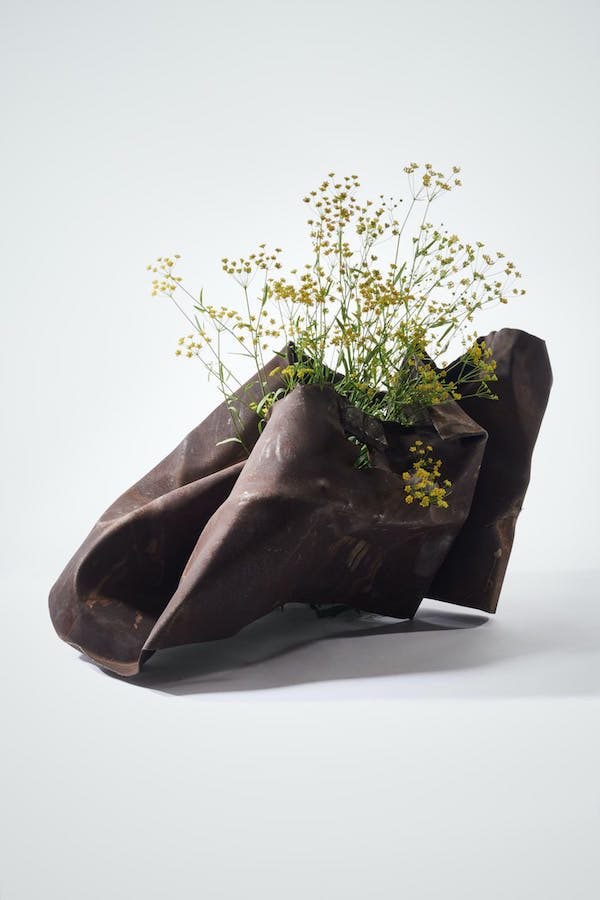 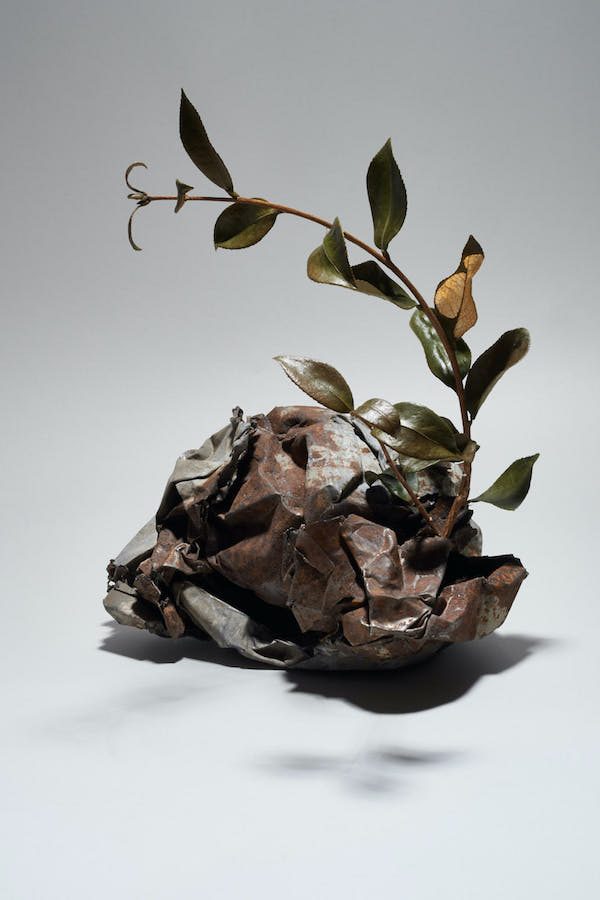 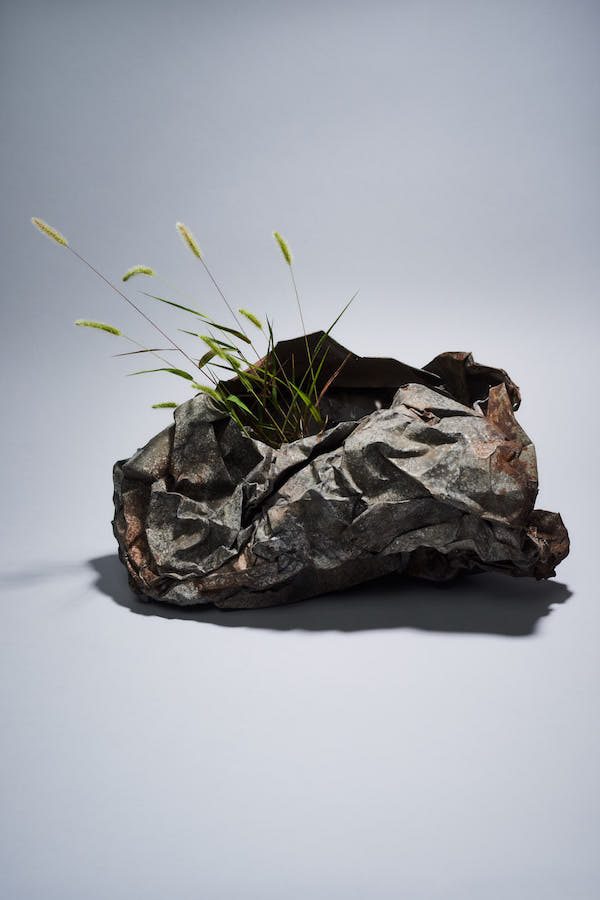 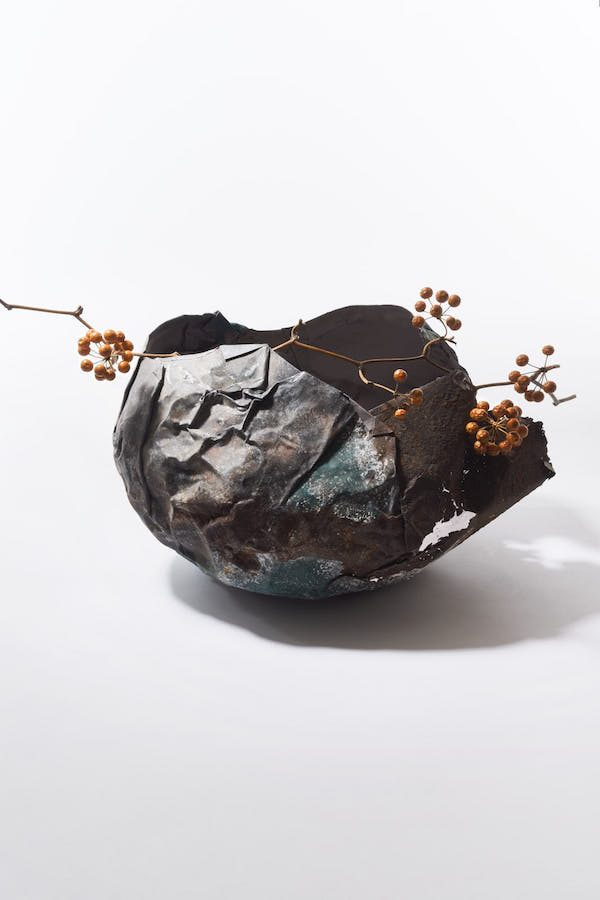 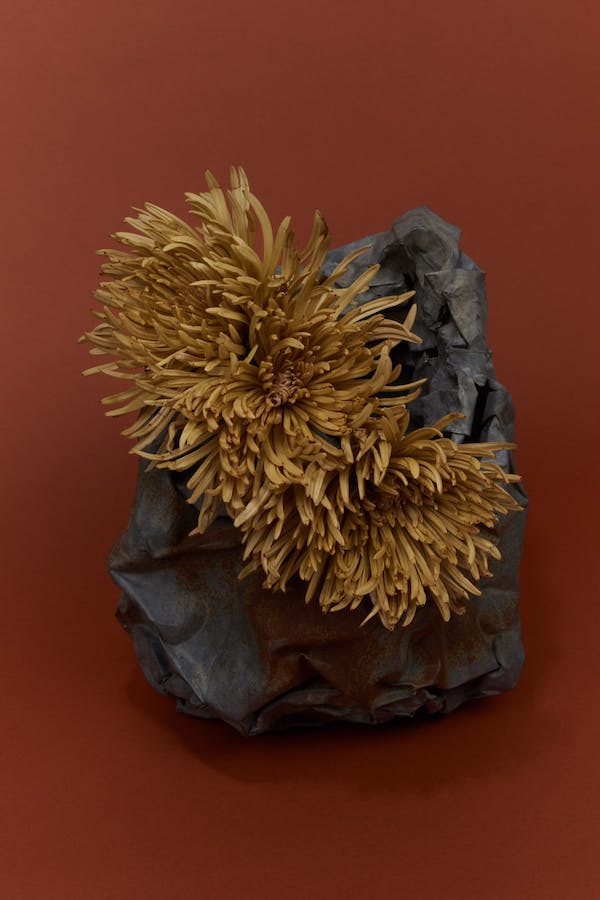 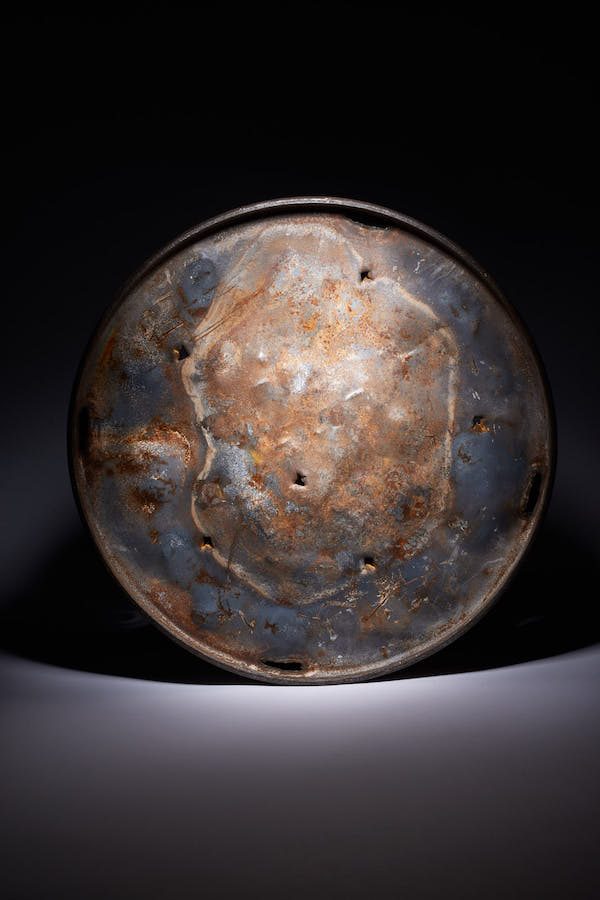 A jagged, rugged metal “object.” The worn-out and seemingly scrapped works of Ryo Azuma are variations on the drifting urban material that we see on a daily basis but leave unquestioned. Regarding copper plates, tinplate, drums, stones, stumps, and so on – so-called “found objects” – encountered by chance on riverbanks and in parks and garages as materials or tools, Azuma improvises a tekkari.

The Public Nature of Street Vendors

The term tekkari, which Azuma applies to his own work, is street vendors’ slang meaning “light” or “hardware,” and derived from a mimetic word standing for a brightly glossy appearance.

Street vendors, while discriminated against for deviating from society, originally had a public character. They were once indispensable at festivals held in the precincts of temples and shrines. Welcoming the common people into these extraordinary places with vigor, street vendors sometimes talked customers into buying inferior goods but also voluntarily contributed a part of their earnings towards civil engineering, with local residents sharing labor and funds in order to repair temples and shrines. Contrary to the modern image of street venders, they had largely helped to maintain local communities.

In addition, during the Edo period, hardware such as pots and pans was rather expensive, so it was common for these to be repaired for use when damaged. Repairs were usually done by specialized street vendors called ikakeya. Ikakeya would bear a yoke to transport a set of tools and, when requested, would prepare a fire out the front of households and refill holes and weld any breaks in such hardware. Ikakeya can be understood as pioneers in a recycling-oriented society, and by the time Azuma chose abandoned metal as his medium, he would have already developed a public consciousness.

Such consciousness manifests as conviction through Azuma’s other work, namely social welfare. Engaged in assisting those with disabilities in artistic activities, he has become more naturally accepting of “others,” acting from the perspective of those with disabilities. Receiving signals from others and shaping them into one form is essentially the same process as when confronting matter in production. Hence, for Azuma, “others” are never limited to those who make up society, and instead cover a wide range of organisms that have the umwelt (self-centered world) and even inorganic substances that have no life. When it comes to ecosystems, indeed, we tend to imagine living things, but these also include inorganic environmental players. The tekkari arises when Azuma moves seamlessly between the perspectives of different beings and triggers interactions between multiple objects – whether living or inanimate – in the same location. What is reflected in this is an ecosystem in which everything exists in a complementary manner, and it is nothing more than a symbiosis that exists beyond the public.

Through Azuma’s hands, “dross,” which has been avoided as a negative legacy of industrial society, can be positively transformed into tekkari where humans (city) seek to establish a new relationship with things (nature). For example, take a look at tekkari in which flowers are arranged. The branches and leaves raising themselves from a rugged and unrefined iron mass seem delicate enough to be crushed at any moment, but they are surprisingly full of vitality. In today’s post-industrial world, rusted metal that is so distorted that it does not retain its original shape urges human reflection, while it makes the flowers seem as elastically strong as weeds sprouting from asphalt. It is not, however, Azuma who arranges the flowers. He is only modestly offering devices that allow the user to more actively sense the “world of things.”

In short, Azuma’s practice is not about building with will and power from the outside, but about arousing the spontaneously occurring form of matter from its inside. This is why Azuma calls crafts “the art of ingenuity” and why he prefers the word “become” to “make.” Like setting up a stone in a garden, listening to the voices of objects left scattered on the ground and extracting and amplifying their auras may be the essence of Azuma’s practice. His “object,” despite being inorganic, or rather because it is, allows us to strongly intuit a world of coexistence beyond the human realm of knowledge and subjectivity.